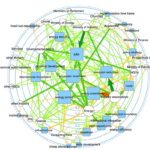 This study presents an analysis of the domestic coalitions in support of and those in opposition to renewable energy policies from a discourse network perspective. Discourse networks reflect actors and the arguments they share to advance or hamper the policy process.
The analysis draws on a data set of 560 coded statements in support or opposition of renewable energy from media articles, policy documents and interviews. Findings show similar structures of competing coalitions in all three countries, with the discourse in all three countries revealing strong linkages between environmental and economic considerations.