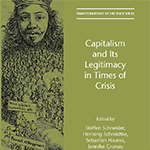 This volume examines why the 2008 financial crisis with the subsequent Great Recession did not foster a major institutional transformation of the capitalist market economy. It highlights the role of ideas and public discourse in explaining institutional stability and change in the wake of economic crises and other critical junctures. Examining legitimation discourse in four OECD countries (Germany, Switzerland, the United Kingdom and the United States) between 1998 and 2011, the contributions to the volume use different text-analytical methods to bring out the ideas that underpin affirmative and critical media discourse on the capitalist regime. Individual chapters focus on the contours and trajectories of legitimation discourse before and after the financial crisis, on the attribution of responsibility for the crisis, on the use of metaphors and narratives, and on the formation of discourse coalitions challenging the regime. Together, they show that the post-2008 legitimation crisis of the capitalist market economy did not result in its sustained delegitimation or in powerful new ideas that might have mobilized support for radical institutional change. The book will appeal to students and scholars of economic sociology, media studies and political science.