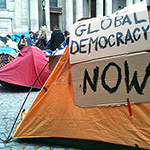 At the International Conference on Cross-movement Mobilization which will take place on April 5-7, 2017 at the Ruhr-University Bochum, Germany (http://www.isb.ruhr-uni-bochum.de/forschung/cross-movement-mobilization.html.en) Jochen Roose and I organize a session on the influence of social movements on other movements’ mobilizations for which we invite abstract submissions:

Social movements interact in various ways. They can develop in direct response to other movements, as counter-movements, or as competing movements in the same issue area – the idea of movement sectors and movement industries draws on this notion. Movements in one country can also influence the development of movements in other countries – leading to weak or strong forms of transnationalization of protest. They can also replace earlier movements as successors after an earlier movement has de facto dissolved – as expressed in the concept of separate waves of one movement. And they can also interact more indirectly, building on an increased willingness to protest created by other movements – an idea that lies behind the more general notion of protest waves.
In this session we invite empirical studies and theoretical papers that explicitly address these forms of interaction between different movements. A special focus shall be placed on interactions between movements addressing different issues.

Please send abstracts (250 words) for this panel no later than October 1, 2016 to the session organizers Sebastian Haunss <sebastian.haunss@uni-bremen.de> & Jochen Roose <jochen.roose@fu-berlin.de> and also to the central conference email address: cross-movement-mobilization@ruhr-uni-bochum.de

Decisions about abstract acceptance will be made by the end of October.