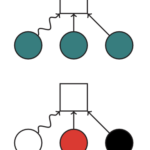 The 2011 policy pivot of the German government, from extending nuclear power plants terms to securing their shutdown for 2022, cannot be explained without looking at how the German political discourse network shifted in the months following Fukushima. This paper seeks to model and identify mechanisms that help explain how the two-mode network of political actors’ support for claims developed.

We identify possible mechanisms to explain discourse dynamics from literature on political discourse and discourse networks, and extend homophily mechanisms to two-mode networks as “tertius” effects. We then introduce and employ a multimodal extension of dynamic network actor models to answer two questions key to how the discourse has evolved: which actors support claims more frequently and which claims they support. Our results indicate that mechanisms vary according to the discursive phase, but that powerful actors participate in the discourse more often, and actors tend to support claims that have already found support by cross-party coalitions. These are the two most prominent mechanisms that help to explain the dramatic nuclear policy change in Germany after Fukushima.