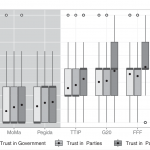 Methodologically, we draw on original data from nine protest surveys collected between 2003 and 2020. The demonstrations under scrutiny address a wide variety of issues such as peace, climate change, global justice, immigration, international trade and social policy. Analysing protesters’ profiles, we focus on differences both within and across demonstrations. We show that demonstrators’ socio-demographic and attitudinal characteristics diverge considerably across the surveyed demonstrations. In particular, we identify two clusters of demonstrations, differing most prominently regarding participants’ political trust, satisfaction with democracy, and perceptions of self-efficacy – the ‘disenchanted critics’ and the ‘confident critics’. Based on a regression analysis across all nine demonstrations, we further show that the distinction of these two demonstration clusters is not the result of the presence or absence of certain groups of demonstrators.