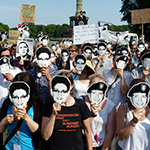 Fuelled by Edward Snowden’s revelations about the NSA’s surveillance practices, privacy is a widely discussed issue today. But despite the eminent visibility of privacy issues in the media, its political salience is questionable. Concrete privacy-enhancing political measures are few and far between and there ar no signs of a growing protest movement.

Why do we see this discrepancy that, on the one hand, citizens seem to strongly appreciate the value of privacy but that, on the other hand, state and corporate privacy intrusion usually remains without consequences? The article tries to answer this question by discussing the findings of the literature on privacy activism and by analyzing those critical interventions and protest mobilizations that emerged after Snowden. It agrues that the continuing weakness of privacy activists under the favorable conditions of the NSA scandal should be interpreted as a result of their coalition-building and framing strategies, which did not favor broad grassroots mobilization but a focus on existing institutions.