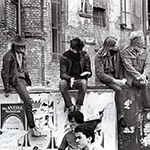 The protests in 1980 and 1981 have been labeled as ‘youth movement’, ‘youth protest’, ‘youth unrest’, ‘youth rebellion’, or ‘youth revolt’. The chapter reflects upon the implications and assumptions of these concepts with the aim to situate these concepts in the broader literature about protest and social movements and to reflect upon the epistemological presumptions that are ingrained in the labels used to describe the protests of the early 1980s.

I argue that ‘youth’ refers to the age of the participants but implies also a generational perspective. The terms unrest, protest, movement, rebellion, and revolt imply a phenomenological perspective and refer to different concepts of disaggregated or coordinated collective action, and to processes of social change resulting from the protests.
Discussing these perspectives, I argue, that the episodes of protest should be interpreted as being related to each other and embedded in structures and dynamics of social conflict that stretch in time and scope beyond the single episode.