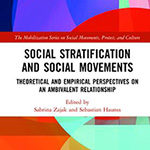 Finally, the volume focuses on the socio-structural composition of protestors. Social Stratification and Social Movements takes up recent attempts to reconnect research on these two fields. Instead of calling for a return of a class perspective or abandoning the classical social movement research agenda, it introduces a multi-dimensional perspective on stratification and social movements and broadens the view by extending the empirical analysis beyond Europe.

4. New Cleavages in the Knowledge Society? Social Movements and the Production, Use, and Valorization of Knowledge.
Sebastian Haunss

9. Mobilization of the Most Deprived – Insights from Brazilian Movements of Homeless People and Recyclable Materials Collectors
Britta Baumgarten